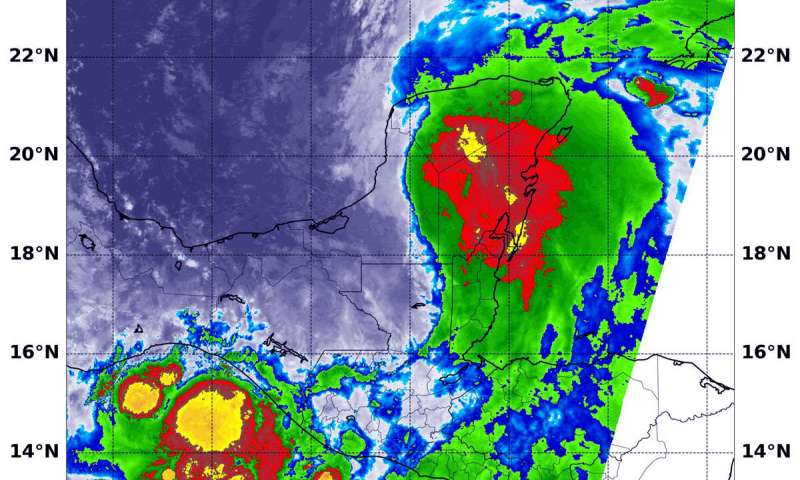 The National Hurricane Center (NHC) forecasts Cristobal to track northward through the Gulf of Mexico and toward Louisiana’s coast. Watches and warnings have gone into effect.

MODIS found several areas of powerful thunderstorms where temperatures were as cold as or colder than minus 70 degrees Fahrenheit (minus 56.6 Celsius). Cloud top temperatures that cold indicate strong storms with the potential to generate heavy rainfall. Those areas were located over Mexico’s Yucatan Peninsula, northeastern Guatemala, and out over the Eastern Pacific Ocean just off the coast of the Mexican states of Chiapas and Oaxaca.

NHC forecasters said, as Cristobal moves north through the Gulf of Mexico, “Through Wednesday morning, for portions of the eastern and central Gulf Coast and the lower Mississippi Valley, rainfall accumulations of 4 to 8 inches, with local amounts to 12 inches, are forecast.”

The NHC said at 11 a.m. EDT (1500 UTC) on June 6, the center of Tropical Depression Cristobal was located near latitude 20.0 degrees north and longitude 89.9 degrees west. That puts the center about 40 miles (65 km) east of Campeche, Mexico. The depression was moving toward the north near 12 mph (19 kph), and this general motion is expected to continue for the next couple of days. The estimated minimum central pressure is 1000 millibars. Maximum sustained winds are near 35 mph (55 kph).

Typhoons/hurricanes are the most powerful weather events on Earth. NASA’s expertise in space and scientific exploration contributes to essential services provided to the American people by other federal agencies, such as hurricane weather forecasting. 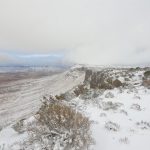