The East Coast was hit with the first winter storm of 2019 last week. The storm was recorded to have dropped up to 7 inches in southeast New York, and up to 1.5 inches in areas of Rhode Island and Massachusetts. Just a couple of days prior to the storm, the Moderate Resolution Imaging Spectroradiometer (MODIS) on NASA’s Terra satellite captured the image below of a wide arc of clouds stretching across the northern part of the nation.

“The arc is a cirrus cloud associated with the jet streak. There was just enough moisture and upward motion to create localized cirrus clouds on the poleward side of the jet stream,” explained Emily Berndt, a Short-term Prediction Research and Transition Center (SPoRT) scientist at NASA’s Marshall Space Flight Center.

The presence of a jet streak is not often apparent in natural-color satellite imagery, but occasionally there are tell-tale signs. According to NASA, the image was acquired when air was circulating around the entrance of the jet streak near Nebraska. 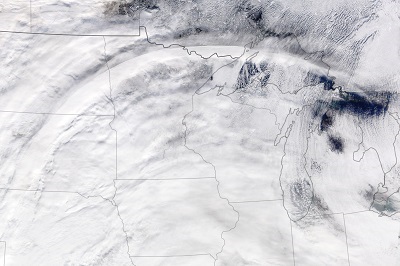 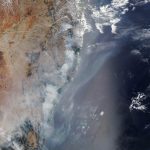